skip to main | skip to sidebar

This last version has several enhancements :
- bug fixes here and there, as usual ;
- I have rewritten all the orgainization of the import module. That leads to major improvments : the stress tests I have conducted show that the system is about 100 faster than the previous version, and is also much more reliable.
- the image module also got some attention. It is now possible to upload ZIP files containing JPEG images. The ZIP file is unzipped in the import folder automatically. No more one by one imports of many imags, just put them in a single ZIP file and you're done.
This version is already available on http://www.openmelodie.org/, and should be able on Sourceforge in the next few days.
Publié par José à 23:04 Aucun commentaire:

I'm glad to announce that I published the first three screencasts on Open melodie.
The first one explains what Open melodie is about, and how it can help you putting your data online quickly and efficiently : http://www.openmelodie.org/
The two others are here http://www.openmelodie.org/channel. There you can learn how to register (1"30) and how to create a first corpus on a real set of data (15"). The example is a real corpus of 250 items, indexed in a few minutes using the importation tool.
The screencasts are in english (at least I tried...).
Have fun using Open melodie !
Publié par José à 13:43 Aucun commentaire:

Happy new year to you all, I wish you a great 2011 year, full of happiness and healthiness.
I'm glad to announce the openning of http://www.openmelodie.org/ ! This is a major milestone in the development of this project, and we are all very excited about that.
This site holds all the resources available about Open melodie in one place (docs, pdfs, links to slides), and a public version of the application, that anybody can use freely.
For the moment, most of the resources are in french, I hope to have them translated soon. The application is localized in french and english, well at least mostly.
The version of the application is 1.1, several bugs have been fixed since the last publication of the source code, and several features (the registration process namely) has been changed, to ease the installation of the platform on 3rd party stites.
Feel free to post any comment, have fun using Open melodie !
Publié par José à 02:01 Aucun commentaire: 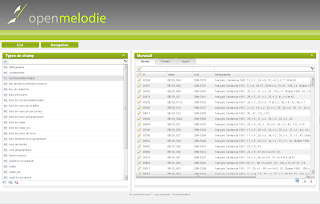 Being silent does not mean remaining inactive, at least it has not been the case for Open melodie ! After nearly a year without any news, I'm glad to announce the publication on Sourceforge of the 1.0-RC1. So no 0.5 (sorry), I also skipped the 0.6, then the 0.7, and found the project was mature enough to be a release candidate. I'll wait a few months more for bug fixes and stuff and package a 1.0-GA after that.
So what's new in this release ? They're so much... I'm not sure I wont forget anything.
First, the interface has been redone from bottom up. We only kept the basic SmartGWT 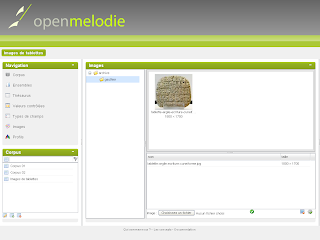 components and put them in a new layout. The interface is really nice now, much cleaner, less cluttered, I'm quite happy with it. Of course it will undergo another update in the next few months, because there's still room for improvement.
Second, all the core functionnalities of the engine are available through this interface. You can create basic stuff like thesauruses and controled values sets. You can add translations to your keywords in a very convenient way. And then you can build corpuses on those low-level data structures.
You are really free to build any kind of complex file structure in your corpuses : from basic string fields, to complex composite fields, everything is possible. I added the "relation field" that enables you to link objects from other corpuses to the current object.
Once your corpuses are built, you can begin to create objects in them. You can create and index them directly from the display grids, or open complex forms on them. Rich text is supported, we embedded the well-known CKEditor.
Of course the full support of high resolution images is in this release. Take an image, upload it, add fields to it, link to any number of objects, and you're done.
On the data browsing side, I could activate the advanced querying tool 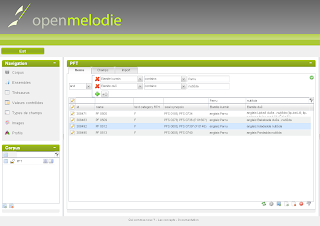 available in SmartGWT, and it works really well ! It has been tested on 5000+ items corpuses, and despite the complexity of the queries entered, the response were instantaneous (well, as it can be over the Internet).
As far as testing is concerned, Open melodie has been online since mid-october '09 and used by non-computer science geek people since that time. Many bugs have been found and fixed, many performances issues have been improved. In those months, about 15 people have been using the server. They have created more than 50k items in a several hundreds of corpuses. There are now in the DB more than 220k indexed fields.
So yes, this 1.0-RC1 release really deserves this 1.0-RC1 status.
As usual, the code is on Sourceforge here (GPL licence) : Open melodie on Sourceforge. What I published are the Eclipse project. If you dont know what an Eclipse project is, it wont be of any use to you, so just drop me a line, and we'll see what can be done for you.
This project wont stop anytime soon, more things will be coming out when I'm back from vacation.
Publié par José à 07:33 Aucun commentaire:

I'm glad to announce that the closed beta test of Open melodie has begun this afternoon. It was quite a rush to install everything on a Linux box in time, especially due to a few sneaky configuration bugs here and there. Having Jersey to run on a Tomcat 5.0 may be a bit tricky, I also found a very amazing bug in the way Glassfish handles the EJB Interceptors.
So we are now close to the first beta release of the code base. We'll jump directly from v0.4 to v0.7, since I dont have enough time on my hands to package a v0.5. Too bad, but the v0.7 will be the first beta release, and we are all very excited about that.
From now on, the first Internet instance of Open melodie will run, and about 5-6 good souls are going to work with it, report bugs, suggest new features, so that we can improve the product.
Stay tuned for more news as things go on.
Publié par José à 10:29 Aucun commentaire:

I was planning to release a v0.5 before going on holydays, but the H1N1 cost me a good 2 weeks of work.
Anyway, the project is back on saddle, with a 0.5 version close to release. Expect some cool new features :
In parallel, a beta version of the software is going to be deployed to be used in production on a few projects. This will be the first deployment of the platform in an openned environment. This experiment is planned to start in about a month.
Publié par José à 05:27 Aucun commentaire:

The fourth release of Open melodie is out on Sourceforge. One again, bug fixes, server side improvments (not much), and a lot of work on the client and its interface.
The client now exposes nearly all the item creation and indexation functionnalities. You can :
You can work on thesauruses and controled values sets :
There are stilll many things to expose in this interface, among them :
The server already supports these functionnalities.
Another feature that has been added is the connection to Google spreadsheets document. Open melodie is able to massively import corpuses from Google spreadsheets. Expect to see this functionnality in the next release. In this version, there is only the very start of it : a session can acquire a Google token to access the user's spreadsheets.
The next version is scheduled to be released by the end of july.
Publié par José à 04:39 Aucun commentaire: